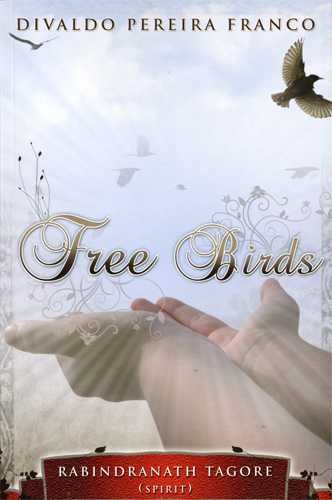 Through Divaldo Franco’s psychography, Rabindranath Tagore’s extraordinary sensibility rewards us with beautiful poems, a real cascade of light, overflowing with tenderness and love! The noble Spirit-poet says “My songs are living poems of love releasing themselves from the tight prison of emotion from whence they are born and conquering the expanse like birds of happiness.”

These songs move our souls and fill our hearts with joy, stimulating our sensibilities for the constant practice of good.

Rabindranath Tagore, anglicized from Rabindranath Thakurα (May 7, 1861–August 7, 1941), was a Bengali polymath who reshaped literature and music in his region. Author of Gitanjali and its “profoundly sensitive, fresh and beautiful verse”, he became the first non-European to win the Nobel Prize in Literature in 1913. In translation his poetry was viewed as spiritual and mercurial; his seemingly mesmeric personality, flowing hair, and otherworldly dress earned him a prophet-like reputation in the West. His “elegant prose and magical poetry” remain largely unknown outside Bengal. Tagore introduced new prose and verse forms and the use of colloquial language into Bengali literature, thereby freeing it from traditional models based on classical Sanskrit. He was highly influential in introducing the best of Indian culture to the West and vice versa, and he is generally regarded as the outstanding creative artist of modern India. Tagore started writing poetry as an eight-year-old, and at age sixteen he released his first substantial poems under the pseudonym Bhānusiṃha (or “Sun Lion”), which were seized upon by literary authorities as long-lost classics. The work of a titan, he wrote over one thousand poems, nearly two dozen plays and playlets, eight novels, more than eight volumes of short stories and over two thousands songs, and a mass of prose on literary, social, religious, political, and other topics. On top of these, his English translations, paintings, travels and lecture-tours in Asia, America, and Europe, and his activities as educationist, social and religious reformer, and politician granted him the universalist title he defended to his last days. Through the psychographed work of Divaldo Franco, he comes back to us, as elegant as in the physical life, speaking of love, God, and beauty with poetry that elevates even the hardest of souls in the greatest Indian tradition called the Bhakti from the VII century CE.

Divaldo Pereira Franco is perhaps the greatest exponent of Spiritism today. Born on May 5, 1927 in city of Feira de Santana in Brazil, Divaldo is also known as one of today’s greatest mediums and Spiritist speakers.

As an author, Divaldo has psychographed over 200 works with over 7 million copies sold worldwide. More than 100 of the titles produced through his mediumship have been translated into 16 languages. As a speaker, Divaldo has given conferences more than 15,000 conferences throughout Brazil and in over 60 countries in all five continents.

Remarkably, all of the proceeds of all his books go to Mansão do Caminho,
"Mansão do Caminho", a nonprofit organization that serves over 3,000 people everyday in the city of Salvador which he founded with his friend Nilson Pereira in 1952.

Be the first to review “Free Birds” Cancel reply

And Life Goes On

In the Greater World

Times of Health and Conscientiousness

In the Realms of Mediumship